It was April 15, 1874 when the first Impressionist exhibition took place in the studio of the photographer Nadar, at 35 Boulevard des Capucines in Paris. Thirty artists participated, coming with an unprecedented innovative drive in both pictorial aspects and in the exhibition project, designed to highlight their individual works.
“That exhibition - wrote John Rewald - was a decisive gesture of defiance that broke with exhibition habits, with the masters or pseudo-masters of the day, with iconographic and pictorial conventions, with officialism, bringing new ideas and revolutionary painting to the Parisian art scene, the legitimate heir of decades of experimentation, arguments, reflections on the role of art in society and its independent language and vision”.
That first exhibition was followed by another seven in the decade 1876-1886, when various authors changed or joined in, all of which were Impressionist leaders.
The Impressionists exhibition was set up with these premises in mind. At the origins of modernity, this journey to discover the transformations of European visual culture in the second half of the nineteenth century tells, through over 180 works on display including paintings, sculptures, drawings, engravings, furniture and clothes, the story of the artists who experienced and participated in the historic Impressionist exhibitions, highlighting all the complexity of artistic research at the time.
As Emma Zanella wrote, the exhibition presents “the final departure of art from the realm of myth and its compromise with modern life, a terrain where to seek new beauty”. “Having broken the classical dimension of pictorial space, the Impressionists only apparently led images towards their simplification; in reality, they infused them with unprecedented depth, richness, and a secret life.
The uneven light that poured in, the buzz that passed through things and surrounded them, the wind that breathed in unison with colours used without fear, with greens, blues, reds, yellows and whites; painters did not know all these things, until then”. In the exhibition, Realism, Impressionism, Post-Impressionism intertwine in a story that interacts with photography, applied arts, fashion and literature.
The exhibition is divided into five sections marked by the verses and prose of some great poets and writers who have the task of overcoming the resistant boundaries of genre, creating echoes of relationships, memories, and thoughts.
The first section, Correspondances, takes its title from Baudelaire’s famous poem (1857). As in poetry the author entrusts the Poet with the ability to understand the language of flowers and silent things, the artists of this section treat nature with new and surprising feelings, easily grasping its grace and classicism as well as its grandeur and monumentality.
The section Le ventre de Paris - a title taken from Émile Zola’s novel (1873) - is the humus from which modernity will develop; this section of the exhibition highlights the double soul of that period, divided between rural life and city life. On the other hand, the literary reference in the La Comédie humaine section is Honoré de Balzac (1841). Just as Balzac tried to depict human ‘Social Species’ and life in his Comédie, with the ambition of encompassing his entire era, so this section of the exhibition intends to bring together the leaders, artists, writers, composers and critics who animated the cultural landscape of Paris with their assiduous presence and their work, determining the birth of Impressionism.
The next section is À rebours, from Huysmans’s novel (1884) which fully represents fin de siècle Paris, with its wave of disillusionment towards Paris’s glittering bourgeois life. In this section, great artists like Cézanne, Degas, Gauguin and Toulouse-Lautrec, who embody a delicate, unstoppable transition of aesthetics and poetics, will lead the arts towards Post-Impressionism and Symbolism, paving the way for the Avant-gardes. The exhibition ends with Le peintre de la vie moderne; here, the literary reference is still Baudelaire (1863) in the role of art critic. The artists in this section describe and embody the concept of modernity through their work. The pieces on display also include some iconic objects from this new glittering and contradictory era, such as Bracquemond’s ceramics, Émile Gallé’s sublime glass and some fine clothing from Italian and French collections. 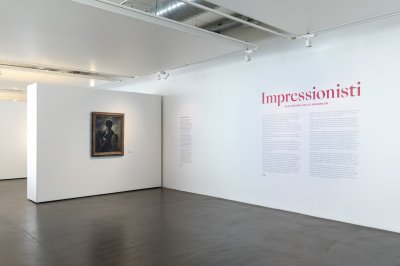 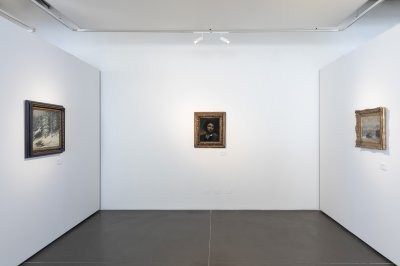 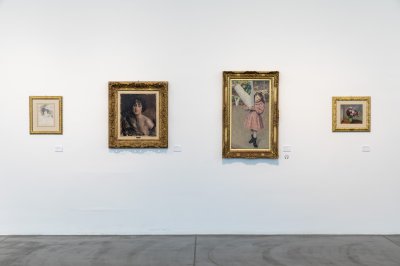 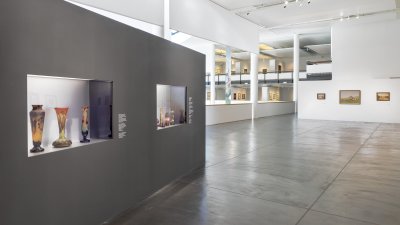 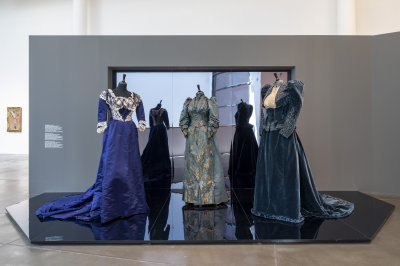 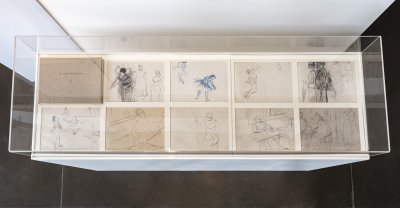